Availability In stock
Released 19 Mar. 2013
SKU
RT-700
Skip to the end of the images gallery 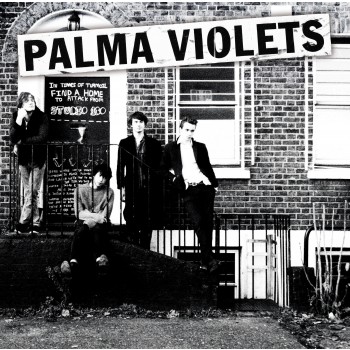 For a long time if you wanted to hear the most exciting new band in Britain, you knocked on a tall black door off the Lambeth Road. An aging British Rail building - part art studio happening, part squat – Studio 180 was where south London’s Palma Violets were gestating, away from sunlight and the world at large.

In an airless basement that could hold 50 people, the band would finally appear in a hail of feedback and organ noise, before blazing their way through a short, incredible set: their sound a primitive, wild rock’n’roll music offering echoes of ‘60s garage and soul but with a defiant Englishness at its core, the band themselves radiating a ferocious energy, encapsulated in the tense and tactile interplay between Chilli Jesson and Sam Fryer but driven forward by the incessant beat of Will Doyle’s drumming.

A thrilling rock’n’roll four piece channeling The Clash, ? and the Mysterians, and the Bad Seeds, from September 2011 they were holed-up here writing songs “their friends could dance to” and occasionally putting on celebratory, ecstatic parties about which word quickly spread.

“The best way to see a rock’n’roll band is to go and see them play live,” elaborates bassist Chilli Jesson. “That’s all we wanted people to do.”