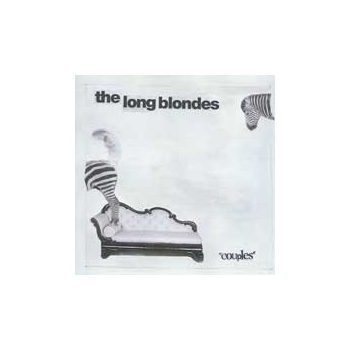 The original goal of this Sheffield 5-piece, was to form a fantasy pop group: Nico, Nancy Sinatra, Diana Dors, Barbara Windsor. Sexy and literate, flippant and heartbreaking all at once. With this in mind, the Long Blondes went falling and laughing headlong into the glamorous world of heaving amps onto trains and touring and touring and touring.

The Long Blondes were aided and abetted on this new musical journey by visionary dj/producer Erol Alkan. Already recognized as one of the UK’s most revered and respected DJs (he’s remixed Klaxons, Hot Chip and Daft Punk amongst many others), he has a burgeoning reputation as a producer that is sure to be sealed with “Couples”. Guitarist Dorian Cox describes Alkan’s input: “Erol has a non-musical approach to production in the tradition of Joe Meek and Brian Eno which was very inspirational. The last thing we wanted was a self-satisfied big name producer who didn’t care about the music or the band. With this album, we were hungry to prove ourselves and we needed a producer who felt the same.”

Musically, "Couples" sees The Long Blondes stepping, dancing, falling and laughing into brave new worlds; “Century” fuses the lyrical collages of Bryan Ferry and the musical cut-and-paste of Saint Etienne. The glacial, minimal “Too Clever By Half” contrasts with the dark murmurs of “Round The Hairpin”, essentially a 1950s teen death-disc taking an unsettling turn via drummer Screech’s Krautrock rhythms and Kate’s backwards singing. “Couples” and “Guilt”, meanwhile, take furtive dances with Stereolab's charm and the Pet Shop Boys’ high art/camp midpoint respectively. Then there's the poignant maturity of “Nostalgia”, the heavy lidded piano and Kate's smoky vocals reaffirming what, by now, you'll already know, " that was then, and this is now… that's all in the past. "

The result? In a nation of identikits, no other group could have written “Couples”. The Long Blondes are moving effortlessly and upwards to those giddy stratospheres that are rightfully theirs.

“Most so-called "cinematic" records earn that distinction due to some quirk of reverb or their use of space, but the Long Blondes only have modern England's typically confined, 17-year-old-from-Doncaster guitar-dudeish sound. Instead, it's the songs themselves, their narratives and their characters that speak to the band's widescreen ambitions.”
-Pitchfork 8.2