Availability In stock
Released 06 Apr. 2018
SKU
RT-884
Skip to the end of the images gallery 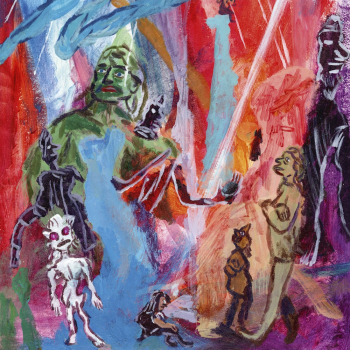 Across 19 tracks in just 40 minutes, Goat Girl’s self-titled debut creates a half-fantasy world out of a very dirty, ugly city reality. In the group’s words: “Simply put, it’s an album that comes from growing up in London and the first hand experience of our city’s devolution.We wanted to think of it as this place seen not necessarily just through our eyes, but someone who can’t get past the abnormalities and strange happenings that exist in our city.”

It’s a very English album (produced by Dan Carey: The Kills, Bat For Lashes, Franz Ferdinand) -- full of sharp-eyed observations like The Kinks, louche rage like The Slits -- but also swampy, swaggering guitars and singer Lottie’s filthy drawl. “It wasn’t exactly intentional to have this warped country sound, but I think that was initially what we were all drawn to and inspired by, bands that existed in a lo-fi , dissonant, scratchy context.”

The result succeeds in conjuring a complete world all unto itself, and is arranged in segments -- divided by improvised interludes -- that offer glimpses of an even stranger parallel universe. With each song acting as its own story of sorts that features different settings and characters, listeners are transported there within. It’s dark yet cheeky, varied yet cohesive, and striking in its vision; this world is populated by creeps and liars, lovers, dreamers, and wonderful lunatics.

Goat Girl is altogether an album crafted with intention, and invites imaginations to run wild. It draws listeners in to its half-fantasy world; from the slow fade, eerie instrumental intro “Salty Sounds,” to the gorgeous, unsettling closer “Tomorrow” -- a rendition of the song featured in Bugsy Malone -- which ends with dawn-chorus birds and the feeling of new possibilities after a long and messy night.