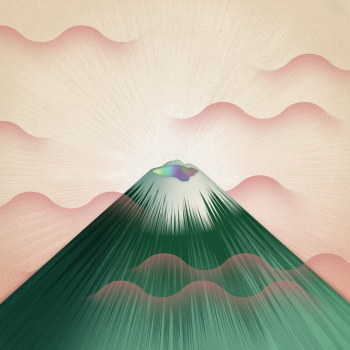 The typically beautiful art direction is by Mark James and the LP features a Mountain Die Cut envelope-style sleeve with a Belly band and is pressed on dark green vinyl.

Signed postcard and poster are no longer available.

Featuring the backing band from 2018’s Babelsberg, most of album’s songs were refined during sound checks and live performances as the group toured around America’s West Coast before decamping to the Mojave desert for a short, but intensive recording session.The remaining tracks were recorded in a similar fashion by Ali Chant (PJ Harvey,Aldous Harding) in Bristol following Rhys’ 2019 European dates. Produced by Rhys himself, the album was mixed by long time collaborator, legendary Beastie Boys producer Mario Caldato Jr, at his Los Angeles studio.

So how do the finished songs of this new pop peak feel? Opener “Mausoleum of My Former Self” grapples with reminders of our many pasts through charming pianos, wild trumpets and Rhys’ soulful vocals. Single “Loan Your Loanliness” is a stomping, bristling non- sense-lyric pop song dedicated to those who endure the solitary peaks that outlast civilizations; it also happens to feature Rhys’ longest guitar solo on record to date. Later album cut “Hiking in Lighting” brings to mind violent weather with a powerful tide of fuzz grounded by the cosmic Solina string synth – a soothing presence felt throughout the entire freewheeling affair.

Tracklisting
A1. Mausoleum of My Former Self
A2. Can’t Carry On
A3. Loan Your Loneliness
A4. Seeking New Gods
A5. Hiking in Lightning
B1. Holiest of the Holy Men
B2.The Keep
B3. Everlasting Joy
B4. Distant Snowy Peaks